This cycle route of the Col du Portalet climb will take you right up to the border of France and Spain. While not as famous as some of the neighbouring cols this is a fantastic ride and definitely recommended. The views as you climb ever higher are sensational. Be aware in Summer the heat can be quite blistering and there is little in the way of shade the closer you get to the summit.

The official start of the Col du Portalet climb begins at Pont Lauguere just out of Laruns. From here the road winds its way up the valley following the Gave d’Ossau. The sound of the flowing river is a constant as you make your way up the climb. It also provides for a spectacular view.

A long climb but never too steep

At 28.5km in length the climb of the Col du Portalet is certainly lengthy. The average gradient for the whole climb is 4.5% so it really is a climb which allows you to get into a good climbing rhythm without being too steep. There are distinct markers for you to pace yourself on the climb such as Artouste – a ski resort which you reach at the halfway point. Lac Fabregas a littler further on the climb brings with it a couple of kilometres which are almost flat. From there the climb gradually gets steeper with gradients hovering around 7% for the remainder.

At the summit you will see the remains of the old border post between France and Spain. The grand Pic du Midi d’Ossau – the highest peak of this range is in full view and depending on the time of year you are riding it may be covered in a blanket of snow. The hôtel du Portalet also provides you with options for food and drink.

The summit of the Col du Portalet as seen from the French side of the border.

There are a few options along this route to replenish food and water. As mentioned earlier the climb is exposed so if taking this on during summer makes sure to take two bidons of fluids with you. Resupply points are:

* Enjoy the lower part of this climb as the road follows the river.

* Spectacular views open up as you climb out of the forested lower slopes and are greeted with wide open views of the lofty peaks of the Ossau range. 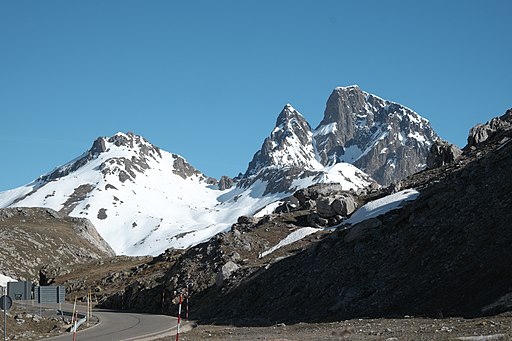 A snowcapped view of the Pic du Midi d’Ossau

and receive our monthly newsletter keeping you up to date with all things cycling in France and more.