This climb up to the summit of the Col de la Pierre Saint-Martin will take you up to the Spanish border. It is a very long climb and one which you really need to measure your efforts on. The Tour de France has graced these slopes two times -most recently in 2015 where Chris Froome came out on top.

Nice and easy to begin with

The official start of the climb is at the village of Arette. The gradient here is nice and gentle, almost flat at times. It stays this way for the first third of the climb which skews the average gradient of the entire climb quite substantially. Use this section to warm up the legs as the climbing really kicks off after the first 8km / 5mi.

After the relatively gentle first third of the climb, the steep grades kick in like a slap in the face. They continue this way for 10kms and often the gradient hovers over 10%. If you are here during the warmer months you’ll certainly be thankful for the shade provided by the surrounding forest trees. Unfortunately being in the forest means there are no real views to take your mind off the gradients at this point!

Free from the cover of the trees

Just before you reach the ski resort you will clear the forest and finally be treated to some spectacular views. The last third of the climb is also substantially easier than the middle section and if you haven’t gone too deep, you may even be able to push harder all the way to the top. Once you hit the French/Spanish border you have reached the summit. Enjoy that descent but be aware this route does contain a cheeky little climb on the return loop. If you want to avoid this you can simply descent back the way you came. 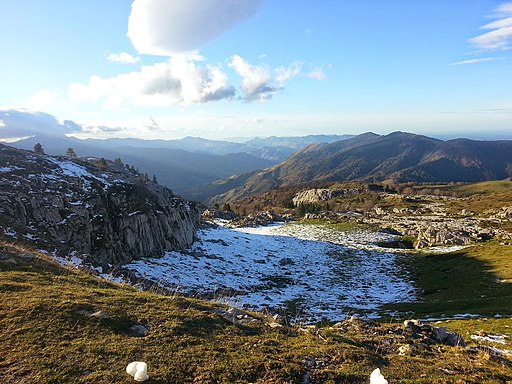 Stock up with plenty of food and water prior to leaving the village of Arette. You can also resupply once you reach the ski resort of Pierre Saint-Martin.

* The views once you break free from the forest are spectacular.

and receive our monthly newsletter keeping you up to date with all things cycling in France and more.