A guide to Cycling the Col d’Eze

Chances are if you on a road cycling holiday in Nice than cycling the Col d’Eze climb will be a ride you want to complete. The Col d’Eze has featured multiple times as a climb in the Tour de France and also Paris Nice. Often included as part of an inidividual time trial the climb begins in the Port of Nice and the gradient kicks up sharply. Whilst not very long it is still challenging with the very beginning of the climb in double digits. It does flatten off in sections so you can catch your breathe as you take in the stunning scenery. The village of Eze with a backdrop of the Mediterranean sea really is a sight to behold.

How does your time on Col d’Eze stack up against the pro cyclists?

Given the Col d’Eze pedigree in both the Tour de France and also Paris Nice, it is natural to want to see how your effort matches against that of the pro peloton. Currently Romain Bardet sits at the top of strava leaderboard with a time of just over 20minutes. Both Ritchie Porte and Bradley Wiggins have also been known to set times closer to 19 minutes with an average speed of close to 30km/hr cycling the Col d’Eze! Sean Kelly who was renowned for his dominance of this climb during the 1980s, also recorded a time of 19 minutes and 40 seconds. A good level amateur cyclist could expect to set a time closer to the thirty minute mark.

This ride will loop you back down with a return to Nice via the coast road. This road can get quite busy in the height of tourist season so be mindful of this. There are actually three approaches to the summit of the Col d’Eze and we have mapped out the more famous side used by the pros. You can of course do this loop in reverse if you so wish as well. Either way you are up for a stunning ride. 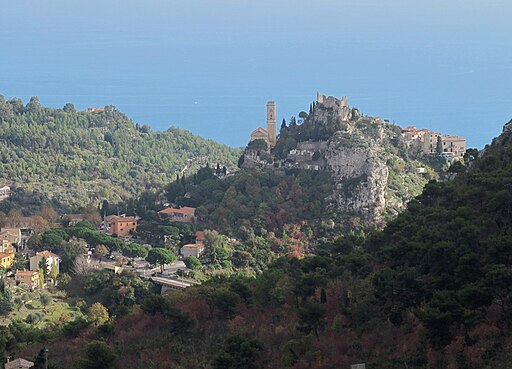 Food and water options are available from the starting point in Nice. You can also refuel at numerous towns and villages along the way. If you fancy a seaside refuel then the town of Beaulieu-sur-Mer.

* Outstanding views to the town of Eze and the Mediterranean from the climb.

* The ride back along the coast back to Nice is one of the most scenic.

Everything you need to know before cycling the Col d’Eze

How long does it take to cycle the Col d’Eze climb?

Generally speaking it will take a well trained cyclist around 30 – 45 minutes to cycle the Col d’Eze climb.

How steep is the gradient of the climb?

The average gradient of the Col d’Eze climb is 4.9%, however the steepest sections of the climb reach just over 8%.

Can a beginner cycle up the climb?

While it will be difficult, it is certainly possible for a beginner to cycle the Col d’Eze climb. We would recommend attempting it on a bike which has a good climbing gear ratio which will make it a little more ‘easier’. Another option if you feel you don’t quite have the fitness is to hire an e-bike from nearby Nice.

How hard is the climb?

The Col d’Eze is just under 10kms in length and was rated as a category two climb when it was last used in the Tour de France in 2020.

What is the height at the summit?

The Col d’Eze sits at a height of 511m / 1676ft of elevation at the summit. It certainly isn’t the highest climb in the region but you will have stunning views towards the Mediterranean from the climb.

Where is the climb located?

The climb of the Col d’Eze is located above the town of Eze in the French Riviera. This area of France sits in the department of the Alpes Maritimes. It is a very popular climb with cyclists who holiday in Nice and is also often used in the stage race of Paris Nice.

When is the best time of year to ride the climb?

It is possible to cycle the Col d’Eze year round as the road remains open throughout the winter. However the best time of the year to ride the climb is in early spring and autumn/fall when the temperatures are still quite pleasant and the area is not full with summer tourists yet.

How many times has the climb been used in the Tour de France?

The climb of the Col d’Eze has featured in the Tour de France on three occasions. It was first used in the 1953 edition and last appeared as a category two climb on stage 2 of the 2020 race.

How do I get to the climb?

Nice is the closest large travel hub to this area of France and boasts an international airport as well as a rail stations with access to high speed TGV connections. From Nice it is easy to cycle to the village of Eze before cycling up the climb of Col d’Eze.

Are there any facilities at the summit of the climb?

No, we recommend resupplying with food and water in the nearby village of Eze.

Where is the closest bike rental to the climb?

You will be able to rent a bicycle from Nice if you want to cycle the Col d’Eze climb and need to hire a bike. There are several options for bike hire here and you will be able to choose from road bikes as well as e-bikes.

Where is the best place to base yourself to ride the climb?

We would recommend basing yourself in Nice if you wish to cycle the Col d’Eze climb. From Nice the climb is easily accessible as are many others in the area. Nice is a fantastic cycling destination in it’s own right and with favourable year round weather it is no wonder that many professional cyclists choose to base themselves in this part of France.

Discover our comprehensive guide to Cycling in Nice

Cycling the Col d’Eze is just one of many great cycling routes near the city of Nice which you can enjoy. This area of the Alpes Maritimes is very popular with cyclists year round owing to the great weather and variety of terrain on offer.

If you are not familiar with this region then, our comprehensive guide will help you plan everything you need for your cycling holiday. The guide includes information such as:

Click here to see a list of cycling routes available from Nice. Our cycling route suggestions start in Nice as we know from experience the majority of people visiting the area will stay in, or close to the city.